I received two absolutely charming letters [Kathleen–December 30, 1908 and Kathlee–December 31, 1908] from you today.  One was written on New Year’s Eve and I was awfully pleased with it.  I wish I could have been with you then.  I am glad you like the necklace.  I should just love to buy you really nice things, but I don’t suppose I shall ever be able to; but I expect that it gives me quite as much pleasure to give you something as it gives you to receive it.  That last sentence reads rather queerly but I expect you will see what I mean.

Just now you will be getting my answer to your letter or rather two answers [Robin–December 29, 1908 and Robin–December 31, 1908].  It occurred to me after I had sent them that one or two sentences were not very happily worded but you will take them the right way, won’t you?  I did not feel at the time either so calm or collected that I could weigh my words very carefully.  It’s all over now though, isn’t it?

Our cold weather broke up on Sunday and now it’s thawing.  I prefer the cold myself.

I had to give up using my water pipes about halfway through the cold snap, as it was more trouble that it was worth to keep them from freezing; and most of the houses suffered from burst pipes, so I thought it would be better if I went back to my well and bucket.

I got in half my ice supply last Friday and Saturday, 66 blocks.  I want 120, one per day for the four hottest months.  I do not suppose they will benefit me much this summer but with any luck some of them will come in handy for us before the hot weather is all over.  I get the ice out of a creek near here.  It is about 14 inches thick.  Now the thaw has come and it is just possible I shan’t be able to get any more unless it gets very cold again.

I went down to the Cleminson’s yesterday (Sunday).  Harry was already there.  I went in the cutter (sleigh) but found the snow nearly all gone when I had nearly got there and, as there is a precipitous hill to get over, I had to leave it by the roadside and pile my things onto the horse and then myself and rode the rest of the way.  We found them reduced to nearly their last crust.  They rely on a launch to get to town and that was smashed and Mrs. C. didn’t like her husband to walk into town (some two miles) for fear he might get frozen; and C. himself is somewhat slack so they were getting along as best they could till more supplies came out.

It appears that during the weeks of cold weather they lived exclusively in their bed room, the only warm room in the house (C. built the house himself and it is full of draughts and the coldest one I was ever in); and most of that time they spent in bed thereby requiring fewer meals, otherwise I suppose they would have been starved into exercise and walked into town.

I don’t know what you will think of the cold out here.  I don’t think it would be half so bad as 22° of frost in England, where you don’t expect and aren’t prepared for it.  But you shall see for yourself.  I sampled it last week most hours of the 24 one day or another and after the first day or two it didn’t bother me at all.  I took jolly good care it shouldn’t though.

Of course all mails are delayed owing to snow in the Rocky Mountains and I didn’t get a letter last week, though I went in every day after work on the chance.  You don’t know how I look for your letters.

I send you the plans of the house with this.  [These plans are not extant.]  I don’t know if you will be able to compare them with the photographs but I rather think you will.  You will notice one room marked as a bedroom in which I have written “double window” (the plan was wrong)–that is “your special”.  I believe I told you before that I wasn’t quite so pleased with it now it is finished.  The stairs are underneath it and we had to cut a large square out of the floor up against one wall to make room for a person’s head going downstairs.  This does not exactly improve the room but had to be done.  Thusly: 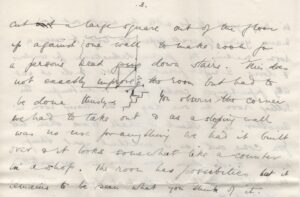 [drawing of a stick-man bumping his head while descending stairs]

You observe the corner we had to take out and, as a sloping wall was no use for anything, we had it built over and it looks somewhat like a counter in a shop.  The room has possibilities but it remains to be seen what you think of it.  Anyway, you’ll be too busy to spend much time there, or so everybody else will tell you; but I have my doubts myself.

As regards colouring the walls, we can get all kinds of wallpaper or distemper or some stuff called burlap which I like very much.  I expect one would have to send to Vancouver for wallpaper but it wouldn’t be much of a job to get it put on.  I used in my youth to be able to work out how many yards of wallpaper it took to cover a room making the proper deductions for windows and doors.  I might possibly be able to do it yet.  Any paperhanger could paper or distemper the sitting room in one day and the dining room in another, so I think I shall leave them till you come out as it wouldn’t upset things much to do them even when you are installed.  We might possibly get the wallpaper in England and stick it on ourselves (or me myself if you don’t like the job), for having got the correct paste I don’t think it would be very hard.  As you will see, there are no passages downstairs and the hall has wooden walls so there’s not much wall surface to do except upstairs and that if necessary we can distemper, pink room, blue room, etc., etc.

If you only knew how I wanted to come home again.  The very minute I can get away I shall do so; but I must be here for when the spring opens, as that is the most important time on a farm and after that I can leave it with a clean conscience.  There is lots I want to do but I don’t suppose it will all get done.  There is a considerable amount of chaos left all around which I should like straightened up, but it can wait; and things that can wait will probably have to.  The trouble is that I can’t do much now till the winter is over.  Perhaps with luck we may get an early spring.  I do hope we do.

I make pathetic requests at the Post Office for my Christmas present but it hasn’t come and they say they can’t do anything about it.  It may be anywhere.  There is always a chance of its coming later as sometimes parcels get mislaid or sent to some out of the way place; but I have never had it happen to me before except a letter of yours which you wrote when you were abroad and for that I blame the continental methods, which I believe are worse that the Canadian.

You seem to have had a lucky escape with Utility but it was certainly very bad luck his getting hurt like that.

I am sorry your poor knee doesn’t get better.  I shall have to be very careful when I dance with you next time, which I trust will be soon.

No more at present.  Ever so many thanks for your letters, dear.  I am rather anxious to get the one that you will write after you get my two letters that I mentioned earlier in this one and then I think I shall be clear of what’s been a most uncommonly heavy weight to carry around for the last two months.  It has nearly gone now but I shan’t feel quite certain of you till I get that one; and then, Kathleen, nothing on earth can stop me coming for you in the spring.