Our brief spell of winter has departed as quickly as it came.  It thawed all New Year’s Eve and the next day every pack, except of course the Heythrop, was hunting again.  I waited till Monday and of course managed to pick out the bad day between two good ones.  The Boys went to Ascot on Saturday and had a very good day and Reggie had a good day yesterday with the Warwickshire at Shipston.  I chose the Heythrop Monday as more suited to Ladysmith, also I am not too keen on the Warwickshire after the Chappell episode [see Kathleen–December 3, 1908].  There has been no sequel yet so far as I am concerned, though I had a great fright one day.  Auntie had been staying in Leamington and told me she had met Mrs. Chappell one day, but apparently Mrs. C. was discrete enough to say nothing.  I think I must talk to Francie Witts about it someday.  She knows the Chappells rather well and it would be amusing to hear their version.  I hope they won’t turn up at the 6-60 dance tomorrow!

We had a strenuous game of hockey yesterday–at least other people had.  I stood placidly in goal and received the swipes of Guelina and Francie on various parts of my anatomy.  There were only seven of us altogether.  Most people seemed to have gone to the children’s dance at Heythrop.

We went to call at Lemington Manor on Saturday and were taken all over the house.  They have made it a lot nicer than I ever thought was possible but I don’t think I have ever been nearer it than the road.  Poor Daphne has got her knee in a splint but she says it’s a lot better and she hopes to hunt in another week or so.  They seem to have been at Lemington since December 1st but we had not heard of their arrival till a card of New Year Greetings reminded us of their existence. 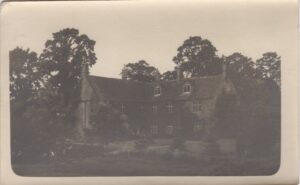 I have not read the “Further Experiences of an Irish R. M.” yet.  It came from the Library last time and I have been waiting for my turn at it.  The Boys have tried it and can’t read it and Auntie only skipped through it.  I wonder if I shall like it!  Your library certainly sounds a most ruinous affair.  If you present the books why pay such a large subscription?

Mrs. Byass told me the other day that Heythrop means to give a ball on February 10th.  Of course we have managed to collect a party without any difficulty for the Ladies’ Ball because it is not certain that it will come off.  There are still four or five ladies required.

I hope Damocles’ sword is firmly chained up again by this time.  I feel sure if he could have moved away he would have, or was it merely greed that kept him?  [See Robin–December 17, 1908.]

Geoff is going to the Arkwrights’ for a dance at Leaminton tonight and to the Gloucester Ball with the Haiters’ tomorrow night–not bad for an invalid!  He was to have gone to one at Oxford on Friday but they have put him off.  He hopes that may just save his life.

I am still trying in vain to hire a hunter.  I hope Hawker will let me have Blackbird on Friday.  He won’t let me have the bay you had last season.  He says he does not mean to let out horses any more–it doesn’t pay, as he has had several badly damaged.  Mr. J. Leigh’s disaster seems to have been the finishing straw!

All my spare time is spent in writing to all the people I can think of who let out horses.  I have hopes of getting one from Burford next week.  I suppose if I do it will freeze again.

I can’t think of any news.  No one seems to have said or done anything out of the common for some time.

Oh yes!  Laurie has had a hunting accident and dislocated a toe!

I had an interesting time on Monday looking after Violet Richardson.  She didn’t seem inclined to follow me so I had to follow her.  I soon gave it up though, as she galloped madly across every ploughed field she saw.  I had to go home via Chastleton to drop her at her door, which didn’t amuse me–I am not so keen on going the longest way home as you are!  It’s a good thing I didn’t have to take charge of her last year.  I expect I shall probably have her again on Friday.

I hope you enjoyed the “Curlers” ball after all.  I expect you did when you got there.

The beagles had a pe and hunt after a fox yesterday!  [The word rendered as “pe” is partially indecipherable.]  They were just whipped off before they got to Mrs. Thursby’s covert.  My horse’s shoulder is healing up well and I hope to hunt him by the end of the month