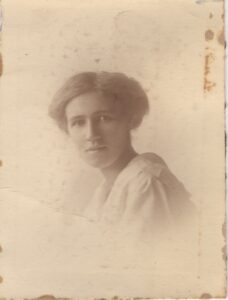 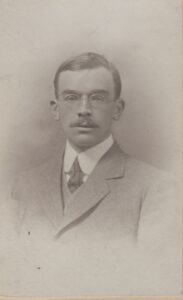 Robin Holford Stubbs was born on June 6, 1882.  His parents were Thomas Walker Stubbs (1857 – 1899) and Evelyn Mary Risley (1858 – 1887).  He and his older brother Thomas (1879 – 1944) grew up at Quar Wood near Stow-on-the-Wold.  Robin’s father remarried in 1890 to a widow named Mrs. Kathleen Moon and their daughter Daphne was born that same year.  After Thomas’ death when Robin was 17 years old the household lived at nearby South Hill Cottage.  Robin attended Haileybury School and Oxford University but did not take a degree.  At the age of 22 he began spending part of each year in Canada, exploring the country with a view to emigration.  Eventually he settled in British Columbia’s Okanagan Valley and acquired a property in the district of Benvoulin near Kelowna. 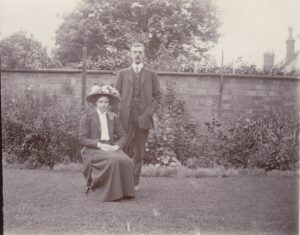 Robin proposed to Kathleen during the Ladies’ Ball at Stow on February 4, 1908.  Kathleen’s guardians opposed the match and insisted that the two young people keep apart from one another for an entire year in the hopes that they would come to their senses and call off the engagement.  Robin returned to Kelowna on March 20 and throughout the next twelve months he and Kathleen exchanged letters every week or so.

Robin returned to Stow in April 1909.  He and Kathleen were married on July 21 and settled on a fruit ranch in Okanagan Mission.  They had four children and died within a few months of each other in 1957.