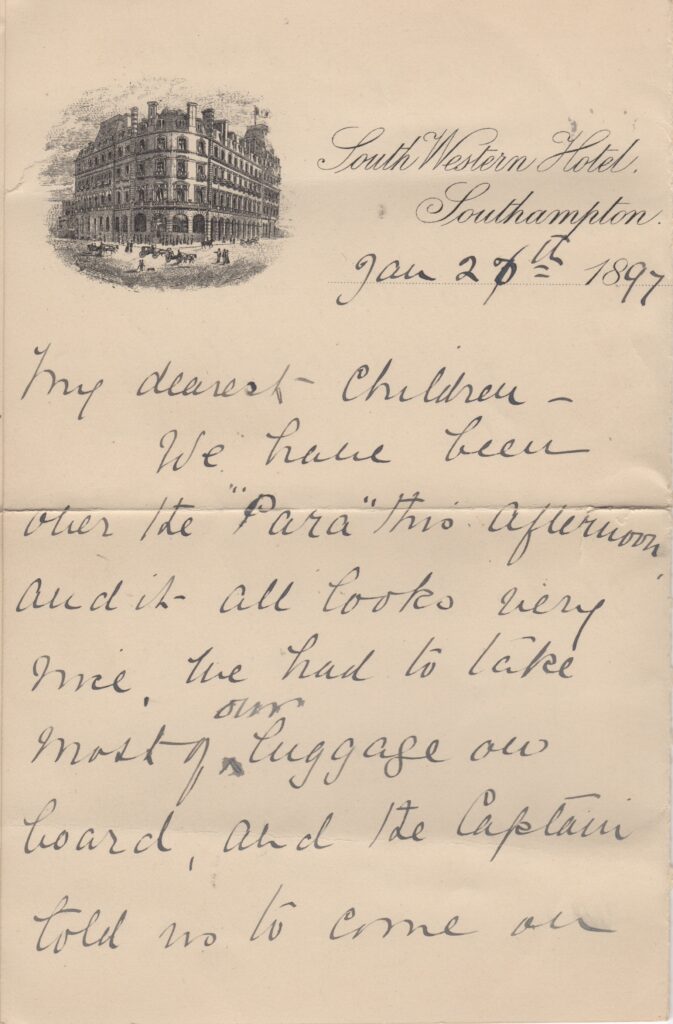 We have been over the “Para” this afternoon and it all looks very nice.  We had to take most of our luggage on board, and the Captain told us to come on board tomorrow about 1 o’clock in time for luncheon, and we sail [for Jamaica] at 2.  I shall have to eat as much luncheon as I can to make up for the meals that I shall afterwards miss, shan’t I?  There is no snow down here, but it is very cold, we saw a good many people skating and sliding on the floods as we came along.  We travelled from Oxford to Newbury with a little boy going back to school, the school that Geoff and Reggie are to go to, he told us all about it and said he was so happy and comfortable there.

We saw Mr. Masow at Oxford, he said Baby had been very good while Lucy was with us, they had all taken a turn looking after her.

Will you ask Dickens to move the piano in [the] drawing room nearer the hot water pipes, I quite forgot to tell her about it—and please give the enclosed to Mason.

I hope Auntie got off all right.  I know you will all feel very dull this evening, but I expect the time will pass much more quickly than we think, and what a lot we shall have [to] tell each other when we are all together again.  Please give my love to Miss Cubilt, and with ever so much from Father and myself to our dear old darlings.

Death of Mr. F. H. Freer.—The announcement of the death from dysentery, of Mr. F. Hubert Freer, of Kitebrook, while on a voyage undertaken for the benefit of Mrs. Freer’s health, came upon the community as a great shock last week, and both high and low are equally mourning the loss of a friend, counsellor, and coadjutor.  Mr. Freer was educated at Rugby, from which school he went to Trinity College, Cambridge.  After taking his degree, he travelled a good deal; he was one of the party in the famous voyage of the Sunbeam.  He married in 1884, Mary Caroline, second daughter of the Rev. James Dawkins, formerly rector of Daylesford.  He bought Kitebrook estate in 1890, and greatly improved and enlarged the house, and he built some model cottages for his employès.  How useful was the life thus cut off in its prime a record of the offices this gentleman has held will show.  Mr. Freer was J. P. in two counties, and a very active member of the Bench; he was on the Finance Committee of the Oxfordshire County Council, and on the District Technical Education Committee; he was Chairman of the Little Compton Parish Council, and of the Chastleton Parish Meeting.  He was on the Managing Committee of the Moreton Creamery and the Steam Laundry, and he was treasurer of the Chastleton Hill Golf Club.  Among all these public avocations, he found time to farm his own land thoroughly well; and to show free hospitality to his friends and neighbours, and take his part in all social duties and events.  Those of his own rank will miss a staunch friend, a cheery companion, and an able assistant in all local business matter.  But the poor will miss him more.  It was not alone that—though objecting to indiscriminate charity—his hand was always open in cases of real distress; it was the smile, the kind word, and the readiness to listen and give practical advice and sympathy that caused Mr. Freer to be looked up to with respect and affection by the villagers with whom he came in contact.  In politics he was a Conservative.  Mrs. Freer’s situation—alone amongst strangers, at the time of this sudden and terrible bereavement—is one that calls forth sentiments of deepest pity.  We understand that the poor lady cannot commence her return voyage before the 30th of this month.  It will be a sad home-coming to her three little fatherless children.

The Death of Mrs Freer.—A correspondent writes:–Some weeks ago, in recording the lamented death of the late Mr. Freer of Kitebrook, we remarked that it would be a sad home-coming for Mrs. Freer; but no one could have anticipated how more than sad, how tragic that home-coming would be.  The wide-spread feeling of grief and sympathy was amply shown at the ill-fated lady’s funeral on Tuesday, April 18, when she was laid to rest in Chastleton church-yard.  No one but relatives had been invited, nevertheless the churchyard was full of sincere mourners, and the coffin was almost hidden under the innumerable wreaths brought or sent by sympathising friends.  The service was impressively and effectively read by the Rev. G. A. Sneyd, and amongst those present we noticed the following:–Rev. J. A. Dawkins and Miss Dawkins, chief mourners; Mr. and Mrs. Dawkins, Mr. L. and Mr. T. Dawkins, Col. Dawkins, Col. Arnold, Mrs. Arnold (Little Compton), Mr. Baker, Capt. Becher, Mr. Byass, Mr. Butler, Rev. C. P. Causton, Mr. Dickins, Mrs. Evans, Mrs. Heberden, Capt. and Mrs. Johnstone, Rev. J. H. Killick, Rev. D. Lockwood, Mr. and Mrs. Martin, Mr. Moore, Rev. A. Nettleship, Mrs. Talbot Rice, Mr. and Mrs. Samuda, Mr. Sartoris, Mrs. Sneyd, Mr. Style, Mr. Thursby, Miss Whitmore-Jones, Mrs. Walkey, Col. Wynter, etc.  The churchyard was thronged with villagers; and numerous and beautiful as were the floral offerings, the primrose, daisy, and other wild-flower wreaths and crosses brought by those who were mourning two of the kindest and most charitable friends they had ever known bore the most eloquent testimony of all to the high estimation and affection in which both Mr. and Mrs. Freer were held.

“THE FAMOUS VOYAGE OF THE SUNBEAM”

In 1866 and 1877, Thomas Brassey, heir of a railway magnate, circumnavigated the globe in the “Sunbeam”, a steam-equipped topmast schooner.  The voyage is considered the first circumnavigation by a private yacht.  One of the passengers was Brassey’s former school-mate Hubert Freer, Kathleen’s father.

In 1881 Mrs. Brassey published an account of the voyage entitled A Voyage In The Sunbeam–Our Home On The Ocean For Eleven Months.  Hubert Freer is mentioned six times in the book.  His most interesting appearance is this:

February 28, 1877.  Hong Kong.  As we were walking along, having left our chairs for a few minutes to look at the Chinese shops, a man picked my pocket of a one-dollar-note.  Mr. Freer and the Doctor saw, pursued, and caught him.  He vehemently protested his innocence, but to no avail.  They proceeded to strip him, found the note, gave him a good shaking, and told him to go.