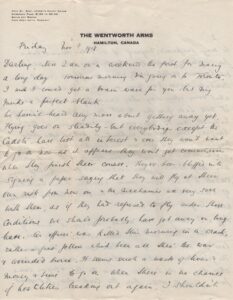 Darling.  Here I am on a weekend, the first for many a long day.  Tomorrow morning I’m going on to Toronto.  I wish I could get a brain wave for you but my minds a perfect blank.

We haven’t heard any more about getting away yet.  Flying goes on steadily but everybody except the Cadets have lost all interest & even they won’t want to go on now as it appears they won’t get any commissions when they finish their course.  They’ve been bluffed into signing a paper saying that they will fly at their own risk from now on & the mechanics are very sore with them, as if they had refused to fly under those conditions we should probably have got away on long leave.  An officer was killed this morning in a crash, rather a fine fellow who’d been all thro’ the war & wounded twice.  It seems such a waste of lives & money & time to go on when there is no chance of hostilities breaking out again.  I shouldn’t be very surprised myself if an order doesn’t come from England pretty soon to disband us.  The weather out here is getting pretty bad for flying & will get steadily worse from now on which means that about every other day they can’t fly & at that rate it will take months to get the Cadets polished off.  Naturally now the war’s over the mechanics in the hangars have lost all interest in looking after their machines.  Most of them are working men who can get 5 & 6 dollars a day in civil life & can’t understand why they should go on working at $1.10 to help some cadets to finish their course when the main ambition of said cadet is to draw his $150 clothing allowance when he gets through.

Duff & I carry on as usual, swinging it most of the time.  Since we’ve had girls working in the Q. M. & have got our stove up we have afternoon tea now!!  The girls bring a cake one day & we provide it the other day.  I don’t know where the tea and sugar come from, probably stolen from the cookhouse, I expect.  We’ve got 3 girls there, 2 of them I haven’t much use for but the other’s quite nice.

Why are you coming out in blotches?  It sounds as if you wanted a blood tonic or something.  Doubtless you’ll see about it if it continues.

I haven’t heard anything from the Loan Co yet & don’t know what they can want to see me about.  I don’t think I’ll bother about having a civy suit sent.  The Government have got to give me something to wear & everything’s so uncertain at present.  If I don’t get home for Christmas I shall expect a good big heavily iced cake unless there’s some chance of your getting put in gaol for making it.  If its only a case of your conscience not approving of iced cakes in war time you can blame it on the fatheads who are responsible for my staying away.

With all my love, ducky, 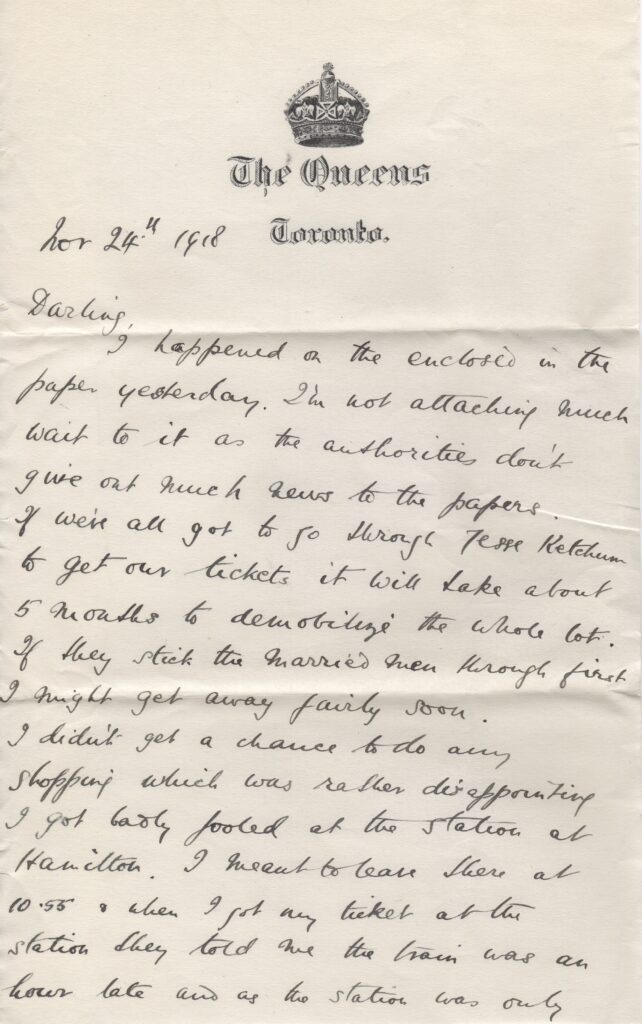 I happened on the enclosed in the paper yesterday.  I’m not attaching much wait [sic] to it as the authorities don’t give out much news to the papers.  If we’ve all got to go through Jesse Ketchum to get our tickets it will take about 5 months to demobilize the whole lot.  If they stick the married men through first I might get away fairly soon.

I didn’t get a chance to do any shopping which was rather disappointing.  I got badly fooled at the station at Hamilton.  I meant to leave there at 10.55 & when I got my ticket at the station they told me the train was an hour late and as the station was only 3 minutes walk from my hotel I went back & came back an hour later to find the train had just gone.  It was 50 minutes late instead of an hour.  I had to hand around till 4.30 so I tried some of Hamiltons best shops for furs for Mary but couldn’t get what I wanted.  Nothing between rabbit sets @ 2.50 and real furs @ $30.  I wanted something about $10.  All the stores have got their Christmas toys in but I didn’t see anything very nice.  How are M & A for reading now?  When I was A’s age I loved Grimm’s Fairy Tales & used to read to myself quite a lot.  Can he do that yet?  Please answer.

The only thing I bought you was 3 packets of Engel art corners total value 45 cents.  Not very much seeing that I was hoping to get something rather nice.  I hope I don’t stay in long enough to get another weekend in which case you’ll have to be contented with what I can find in Hamilton.

I gather that Stella deserves rather a nice blouse for Christmas.  She sounds a most excellent person.  I hope you won’t both box my ears if I call her Stella from force of habit.

I got here last night just in time for dinner & had a most gorgeous meal.  About 6 courses each one something I specially liked.  If I could have had a whisky & soda with it it would have been a real dinner.  Afterwards I went to a theatre & then to the grill room at the Prince George & so home & slept till noon today.

I’m finding it a great relief to get away from that dam Ford truck for a day or two.  I’m getting far too much jolting around.  The roads are pretty bad & it has solid tyres behind.  After a month or two one begins to notice it.

I must stop now & go & get some tea somewhere (4 P.M.)  I’ve only had one meal so far today & then I’m going to Jesse Ketchum to try & find Scotty Bissett (I think I’ve mentioned him to you).  He didn’t withdraw his application when Duff & I did & they’ve got him at J. Ketchum now & don’t know what to do with him.  Its a little late in the day to transfer him to something else.

All my love, ducky,

Darling,  Things seem to be moving at last.  Flying is stopped & demobilisation is to start right away.  I don’t know when my turn will come but if I have decent luck I’ll be home by Christmas & if not then very soon afterwards.  Isn’t that splendid!  As son as you get this send off a grip for me to the Queen’s Hotel, Toronto “to await arrival” pay the express.  My great coat, grey suit, knitted waistcoat, 2 shirts, 4 collars, a tie or so, some hankies & a cap.  I hope you can get all that into a grip.  Lock the grip & send me the key, also tie some cord round it.  You’d better do this at once as I may get away any time within 3 weeks or 2 months.  I can’t tell atall [sic].

some.  These are duly enclosed.

The Loan Co is sending me a small box of apples.

I found a ripping letter from you waiting for me.  Another 4 lbs of you for me to make much of.  Truly I’m pleased.

So Stella’s pretty, is she?  I told you that a long time ago when I met her, very flushed after bicycling up the grade trying to find the house.  Don’t fire her till I get back!!!

I’ll bet you don’t know what particular moment I’m looking forward to most on my return.  It isn’t in the least what you might think it is, but I know quite well in my own mind what it is.  Make a guess in your next letter & I’ll tell you if you’re right.

Darling.  A note from you saying Tony is better.  Thats good.

A nasty little scare yesterday when we heard that they were going to start flying again & fly for 4 months but that was cancelled before the evening.  One can’t be sure of anything.  Mr. Watts said yesterday we should all be out in 3 weeks but then they change their arrangements so quickly.  I shan’t feel really happy untill [sic] I’ve got my discharge papers in my hand & then heaven help anybody who tries to get them away from me.

We’re very busy in the Q. M. today getting things straightened out, & stock taking & shipping stuff away.  If they keep to their present arrangements I guess we shall really get away fairly soon.  There’s an unfortunate chance that the Q, M. staff may be left till last as everybody has to turn in their kits in here & I suppose we’ll have to pack it up.  I shan’t worry as soon as they really get started demobilizing as they can’t very well change their plans when ½ the men have gone.

I’d like to manage it by Christmas but thats getting pretty close now & there seems a lot to do.  It would be rather nice if I could be my own Christmas present to you.

Its getting very wintry here now, beastly cold at times.  I would hate to have another winter like last.

I sent you some photographs in a magazine yesterday.  I hope you found them all right.

I’m going out now to photograph some of the Q. M. staff.

Nothing much to write about.  We’re very busy packing everything up & of course beginning to feel very unsettled.

We can’t find out definitely when we get away but I don’t think it will be very long now.  The work is nearly all thro’ now except for our department.  A lot of Cadets are going away tomorrow & I expect some mechanics will get away next week.  I have a sort of feeling I’ll be home for Christmas & that isn’t so very far off now.  I rather expected a letter from you today but I haven’t been able to find it yet.

I can’t write any more just at present.

So you did manage to take some photographs on Peace day.  Good for you, I never thought you had as you didn’t mention it.

Hamer went off today with his discharge.  Lucky fellow.  I suppose I should have been going to [sic] if I hadn’t withdrawn my application that time.

We are getting on with the packing.  I helped to pack up 5 large cases of clothing last night.  We worked late so as to get Sat afternoon & Sunday off.  I’ve got a pass for Hamilton but haven’t gone.  The flue’ is bad there again & all the theatres & restaurants are shut so its not much good going.  Neal & I are looking after the Stores.  We’ve each got a bed made up by the stove & a couple of books out of the library & I’m going to bring my blankets over & sleep in here tonight.  Its beastly cold out so I’ve been frousting [sic] ever since dinner but as soon as I’ve finished this letter I’m going to dressup & go out (8.P.M) if only to get some fresh air.

I see in the demobilisation orders that married men get the preference so with any luck I shan’t be kept till the last.  We cannot find out the date when they’ll start sending us off.  It is silly of them to keep it such a secret.  Deseronto has been demobilized.

I note your request for a woolly sweater & will see what I can do when I get to Toronto.  I needn’t have worried so much about a civvy suit & it appears that we are to be allowed to keep our uniforms.  Anyway I can stuff my uniform in a kit bag & use the grip for woolly sweaters, fur muffs, & other Christmassy things if I’m going to get home by Christmas.  That remains to be seen.  I’m getting very fed up & so are most people.

Heaps of love.  I’m sorry my letters are so rotten these days but I can’t help it.