I arrived in Bournemouth today but have hardly had time to look around much.  The weather is ideal so when we walked along the promenade there were enormous crowds sunbathing on the beach.  They were as thick as ants on an ant heap stretching in both directions as far as one could see.  We left Freetown on the 18th on a cargo passenger job and had a rather unenjoyable trip here for we travelled third class.  Slept in 3-tiered standees [?] in a large hold about level with the water line and ate in a mess deck just below this.  At first the food was so bad that we hardly took any but our complaints were so strong that some improvements were made and ft. lts and naval lts though sleeping with us were allowed to eat in the first class dining room.  Army captains still ate with us for this was an army transport.  The sea was smooth all the way and the ship much steadier anyway than the ‘rolling’ Andes so I never heard of anyone being effected [sic] by it.  The weather, even after we got out of the wet belt was still dull and too cool for my liking.  We dropped anchor at [Greenock?] for a day and then the following afternoon went slowly up the Clyde on a beautifully sunny day and everybody was on deck to see the sights such as Browne’s shipyards and all the others.  Many times an appeal came over the loudspeaker for us to trim the ship for everyone would crowd to one side to see the sights.  We stayed another night on the boat here and then got off the following afternoon, we nine Canadians being nearly the last off.  Had another all night session on the train but it wasn’t too bad for there were only four of us in the compartment and two slept on the seats—two on the floor.  We decided to stop over in London a night to pick up mail from base P.O. etc. and I got your letters from June 13 to July 11 [i.e. MKF450613, MKF450622, MKF450704, MKF450711, and RHS450708].  In the evening two of us with Alex went to a new club—about the best one I’ve seen yet.  It was nice to see London with the lights on for the first time but as yet there are no neons.

I have not had a word from Peter [Mallam] since the day I left London before so to here [sic] that he was home, let known [alone?] that he was married was a great surprise.  I was rather annoyed about his not writing [see MKF450809] because I lent him a lot of money that last night and I’ve never even heard how he spent it though I guess it went fast.  I suppose I might as well tell him to keep it as a wedding present though I hardly see what benefit Patty will get from it.

I can’t think why Dick [Stubbs] isn’t getting home.  If he is still in Germany then I am pretty sure I will be home ages before him.  It is rather a bind getting back to RCAF discipline after being in the RAF so long and from what I can gather today it is very difficult to get leave from here even though coming back from overseas.  I must see the Freers again so I will start working on a plan.  There must be some way.  Should learn some more definite gen tomorrow so will write again.

The big wigs around here finally relented sufficiently to give us five days leave.  It was to start Saturday but I just managed to catch the 3:00 train on Friday and spent one night in London before going to Ditchford.  Uncle Geoff [Freer] was away but came back that night.  He is away about four days a week but even when home spends a very great deal of his time in his ‘office’ on the handicapping.  Sunday morning Valery [Freer] and a young friend of hers played some tennis on Mrs. Jamesons [sic] court.  Mrs. Jameson is a great friend of the Freers and spends most afternoons on the farm.  After my long absence from the game I was much better than I expected and beat them both.  Valery has dropped some of her farm chores and no longer milks the cows in the morning.  Instead she goes riding her show horse and grooming it which takes a good deal of time.  So far she has got a third and a fourth place in the two show [sic] she has entered.  The next two days were really busy.  I don’t know why my hands didn’t get blistered but I had many aching muscles.  We were hauling and stacking barley and oats using two wagons.  There was as many as eleven of us at one time.  I tried all the various jobs except on the stack.  Pitching off the load was the worst so after one of these I would drive the tractor for a rest.  They use an engine driven elevator for stacking so they go up pretty high.

On Monday night Tom [Freer] came over for supper.  He had just got home and was off the next morning to some station to take up his duties (though he hasn’t the vaguest idea what these might be).  He seemed very fit so the P.O.W. life didn’t seem to harm.  He is debating whether to continue flying if possible after the war.  The following afternoon Uncle Reggie [Freer] and Mina were over.  The following morning Valery woke me up with the news that the war was over and that all on leave were to have an extra two days.  Unfortunately the 9:00 news said this didn’t apply to those on embarkation leave which seemed to apply to me so I caught the train that morning.  Found out when I got back however that all parades were cancelled until tomorrow morning.  I only had about two hours in London on the way back—early afternoon.  The King and Queen had driven to parliament in the morning in a terrific downpour but when I arrived there was rather a lull.  The crowds were beginning to gather though.  I walked through St James Park and coming back along the mall met celebrating crowds storming towards the Palace.  No doubt I should have stayed on the off chance of seeing the Royal Family but I guess Bournemouth was just as good a place to do so as any.  There were terrific crowds down town dancing and singing in the streets accompanying the P.A. speakers dispersed along the way, fireworks and flags and coloured lights.  The second night was just as hectic as the first but the crowd was never unruly.  No taxis overturned.  Nothing like that—though cars trying to push thru the crowds picked up passengers like a magnet all over them.  Tis a wonder there weren’t any accidents.

We came down here on the 21st and expect to be on a boat soon after the beginning of September.  This is a very picturesque town, rock cliffs & hills rise brokenly to about 500’ and the town is built all over this so the streets wind around in a most crazy pattern.  One never knows what to expect around the next bend.  Our quarters (ex-private hotels) don’t care [sic] with those at Bournemouth and are rather a steep climb from the bus stop but it is a nice change to be here.  Staying in my hotel is a Doug. Wilson, son of the tennis player Mrs. Wilson you know.  He is very keen on tennis also and has played in several tournaments in England.  This morning I watched him play the former junior champ of Montreal but he was outclassed there.  One day the two of us went to a dance at the best hotel in town and it really was quite a place with wide balconies off the ball room looking down onto the harbour, a spacious bar, formal dress.  We were introduced to two girls staying there and spent the evening with them.  Mine had driven down with her people from Leeds, 350 miles—so some people can get petrol.  At the dance I met Lt. Charlie Craster (Vernon) who was on leave.  We got to talking about the old days back in the office and it didn’t sound so good.  Still there is nothing else to do.  He and I went to see Henry V yesterday.  This was one of the few times when I have really felt like walking out of a show and others I have talked to did just that.  I couldn’t follow the story at all—part of the conversation was in French and these were just as easy to understand as the Shakespearian English.

I guess Peter [Mallam] isn’t very popular at home after rolling the car over.  [MKF450809]  They should have got it insured when they heard he was coming home as he has rather a habit of rolling over on that road.

This afternoon I went through the famous (though I hadn’t heard of them before) Kent Caverns.  I expect they were nearly half a mile long with lots of small tunnels on the way.  They were truly remarkable with their age-old stalagmites of different colours and bones of prehistoric animals encased in the rock.  Around the floodlights the heat has caused moss etc to start growing.  I suppose the seed must have been there lying dormant for millions of years.

[re “stalagmites”:  RAS450825 is a reply to MKF450809, on the cover of which Tony has tested the spelling of this word by writing out, “stalagmites stalagtites”.] 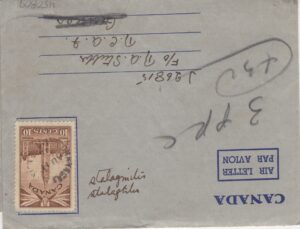 This is definitely the last letter from this side of the Atlantic.  I am leaving tomorrow for Greenock [?] to embark on the Empress of Scotland (ex Japan) for Halifax.  When I collected my mail this morning I saw a card there for Dick [Stubbs] and the postman said he was in Torquay.  He must have just arrived.  I have a parade this afternoon and a muster parade tomorrow morning so probably won’t see him.  If he is very lucky he might catch the Nieuw Amsterdam from Southampton to Quebec on the 5th and get in about the same time as I.  The rest of the West Africans are going on this and I wish I was with them.  Doug. Wilson is the only one I know on this ship of mine.

Haven’t been doing much here except wander down town for toast and tea in the mornings, steak suppers at another little restaurant, rowing once in the harbour, visiting Kents Caverns, the odd show (Weekend at the Waldorf was very good), bridge and crosswords.

I have several letters to toss off so this will have to hold till I get home.  Be funny if Dick and I arrived on the same train wouldn’t it! 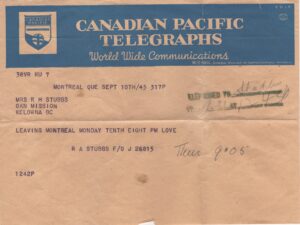