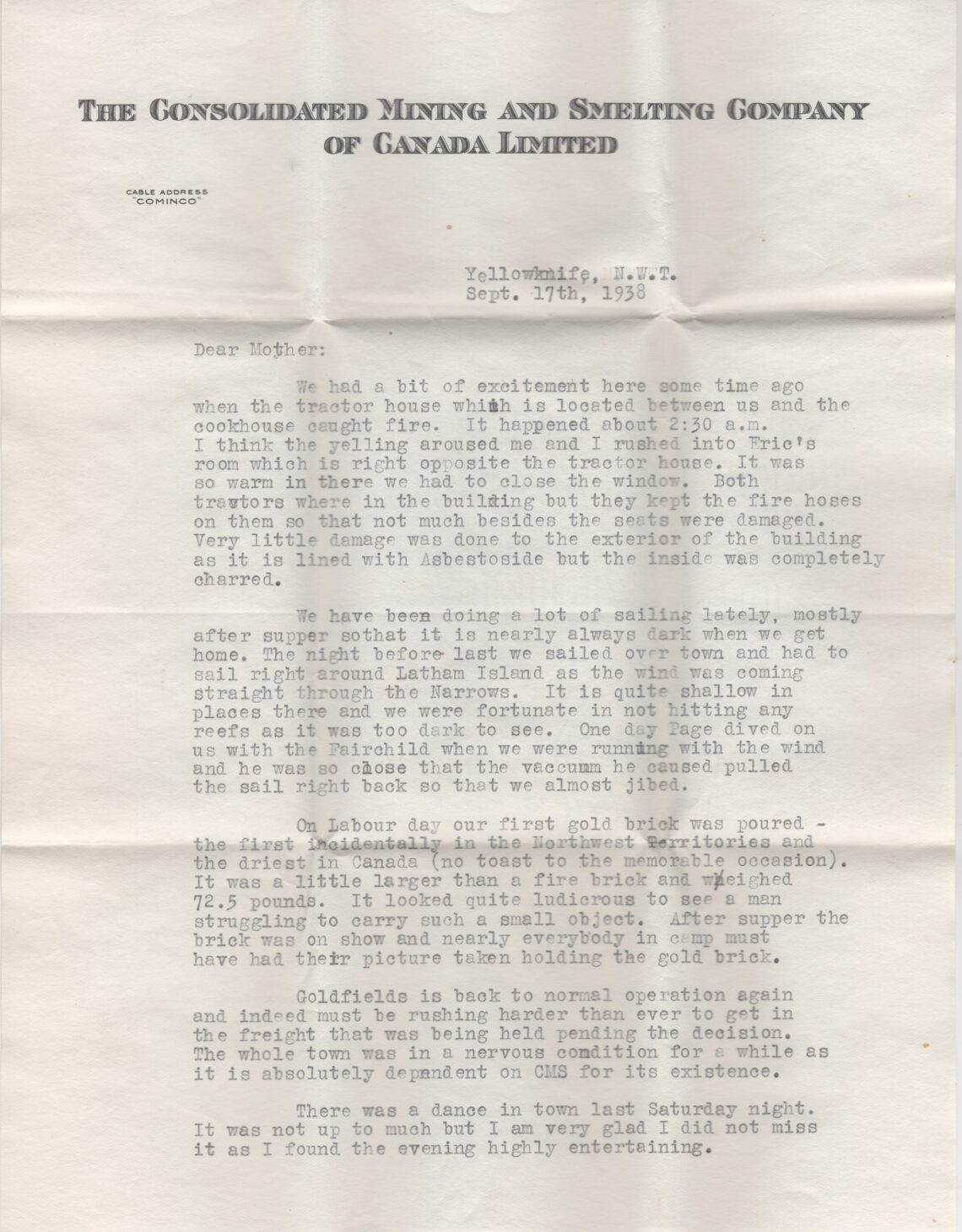 THE CONSOLIDATED MINING AND SMELTER COMPANY

We had a bit of excitement here some time ago when the tractor house which is located between us and the cookhouse caught fire.  It happened about 2:30 a.m.  I think the yelling aroused me and I rushed into Eric’s room which is right opposite the tractor house.  It was so warm in there we had to close the window.  Both tractors were in the building but they kept the fire hoses on them so that not much besides the seats were damaged.  Very little damage was done to the exterior of the building as it is lined with Asbestoside but the inside was completely charred.

We have been doing a lot of sailing lately, mostly after supper so that it is nearly always dark when we get home.  The night before last we sailed over town and had to sail right around Latham Island as the wind was coming straight through the Narrows.  It is quite shallow in places there and we were fortunate in not hitting any reefs as it was too dark to see.  One day Page dived on us with the Fairchild when we were running with the wind and he was so close that the vacuum he caused pulled the sail right back so that we almost jibed.

On Labour Day our first gold brick was poured—the first incidentally in the Northwest Territories and the driest in Canada (no toast to the memorable occasion).  It was a little larger than a fire brick and weighed 72.5 pounds.  It looked quite ludicrous to see a man struggling to carry such a small object.  After supper the brick was on show and nearly everybody in camp must have had their picture taken holding the gold brick.

Goldfield is back to normal operation again and indeed must be rushing harder than ever to get in the freight that was being held pending the decision.

The whole town was in a nervous condition for a while as it is absolutely dependent on CMS for its esistence.

There was a dance in town last Saturday night.  It was not up to much but I am very glad I did not miss it as I found the evening highly entertaining.  I missed the last taxi home so I did not get home until 8:30 Sunday morning.  I never saw so many fights in my life and the mounted policeman was using his blackjack to advantage even on the good Samaritans trying to stop a fight so that on the following day at least four around here had badly blackened eyes.  Our mill supt. Never even got to the dance.  He started throwing dice with some of the MAS and CAL pilots and after reaching a peak of up $500 he finally finished some $120 down on what he started with.  Eric was watching the game for a while and said that a hundred dollar bet was not at all out of the ordinary.  This Yellowknife is getting to be quite a place.

There has been a sudden decision to sink a shaft in the Lily-Jack claims 10 miles up the river from here and Tudor got back tonight from a rush trip to Edmonton to order the necessary supplies.  Am wondering whether the project will be extensive enough to require on of the office to be stationed there.  Tudor came back in the little Hornet plane and the pilot tried to fly from Edmonton non-stop against a head-wind.  At that they almost made it but ran out of gas just this side of the Indian village and had to be towed the last mile by an outboard.  The pilot will have something to live down now.

A load of fresh meat came in on a refrigerator barge for Burns & Co. plant here not long [ago] and we have had a selection of fresh pork and mutton which has been very welcome.

I am glad to here [sic] that Punch is on the road to recovery.  I wonder why on earth it would happen to strike him.

Will you let me know if Dick is staying in the same place as last here [sic] and if so the phone number, if not, the new address.

This will be all for now but I will try and write oftener in future.  If I had not known the date the gold brick was poured and that I had not told you about it before I would not have known it was so long since I last wrote.

Cominco Magazine with a picture of Tony holding the first gold brick.