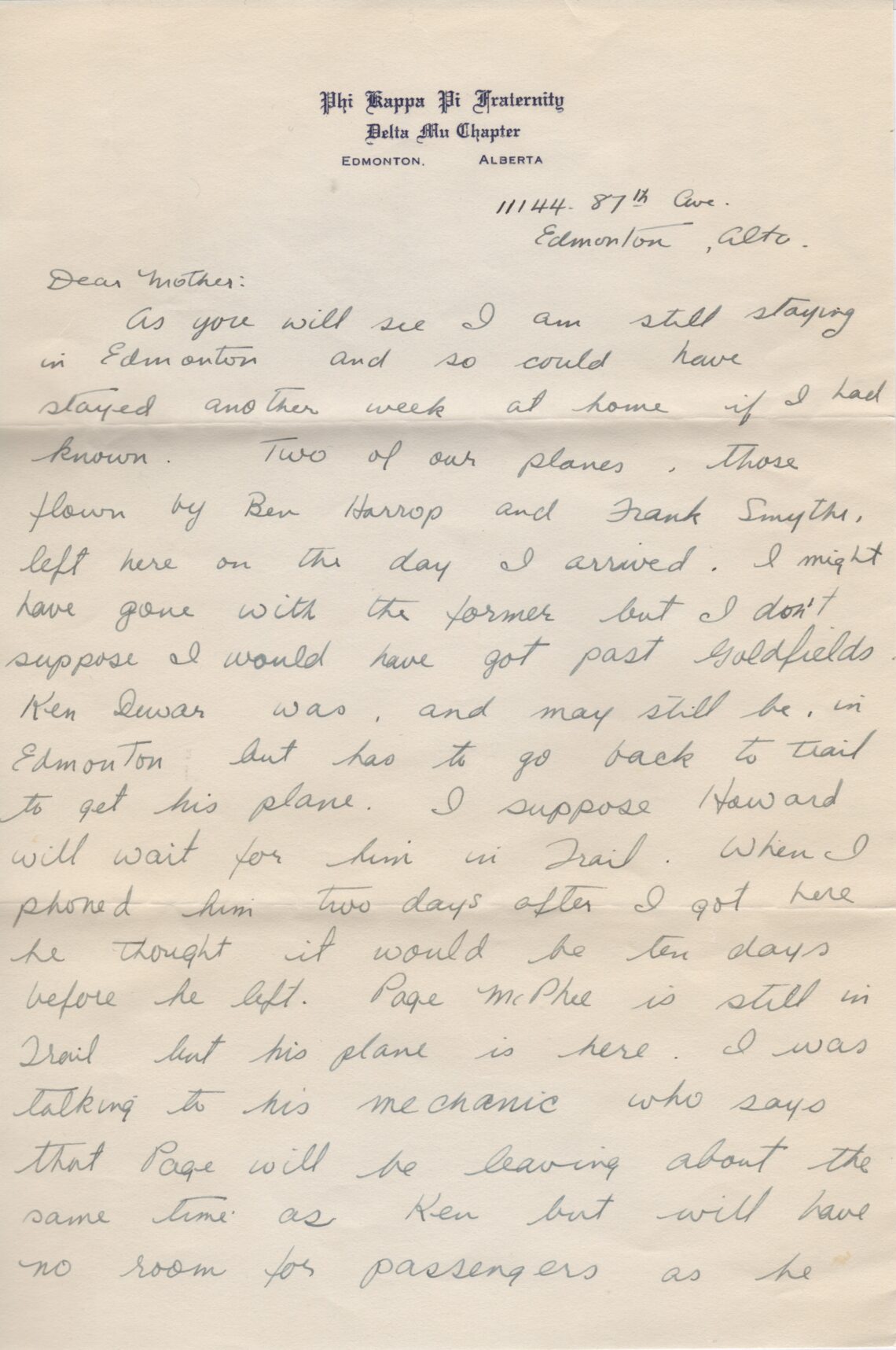 As you will see I am still staying in Edmonton and so could have stayed another week at home if I had known.  Two of our planes, those flown by Ben Harrop and Frank Smythe, left here on the day I arrived.  I might have gone with the former but I don’t suppose I would have got past Goldfields.  Ken Dewar was, and may still be, in Edmonton but has to go back to Trail to get his plane.  I suppose Howard will wait for him in Trail.  When I phoned him two days after I got here he thought it would be ten days before he left.  Page McPhee is still in Trail but his plane is here.  I was talking to his mechanic who says that Page will be leaving about the same time as Ken but will have no room for passengers as he has his family with him.  Perhaps if I wire Tudor he will give me authority to travel with Page.  Anyway I would almost prefer to be back north as to stay around here very much longer.

When I got to Sicamous I met Colin Carruthers and Miss Dale, Howards finacée.  Colin stopped off in Banff and Miss Dale at Red Deer but they are probably both in Edmonton now.

I have seen two good shows since I left—“Men With Wings” and “Drums”.  They are both technicolor pictures.

On Wednesday evening I went to a fraternity alumni meeting.  There were just seven of us and we had dinner at the Corona hotel and later after the meeting went to one of the boys houses were [sic] we played poker.  Our host graduated around 1932 but has apparently already made his fortune and we were astounded with the size and splendour of his new home which he and his wife had designed.

I am trying to get Doug. Sharpe ti cime up here for a couple of days.  I had a long chat with Doug’s. girl and we tried to plot some way of enticing him here and even thought we had succeeded and then he did not show up.

I think I will drop around to the King Edward Hotel this afternoon and see if there is any more definite news of the planes than there was before.  It is really too bad I did not learn this before I left home.

I had supper last night with my northern room-mates people and they had recently had a letter from Gray.  He mentioned no news of the office.  However he said work had been resumed on the Recreation Hall and it was nearing completion.  Also everybody is very keen on hockey and our rink is finished.  Town is to have a rink and I think Negus Mines is to have a team as they have recently ordered a lot of equipment.  Things should be a little more lively this year.