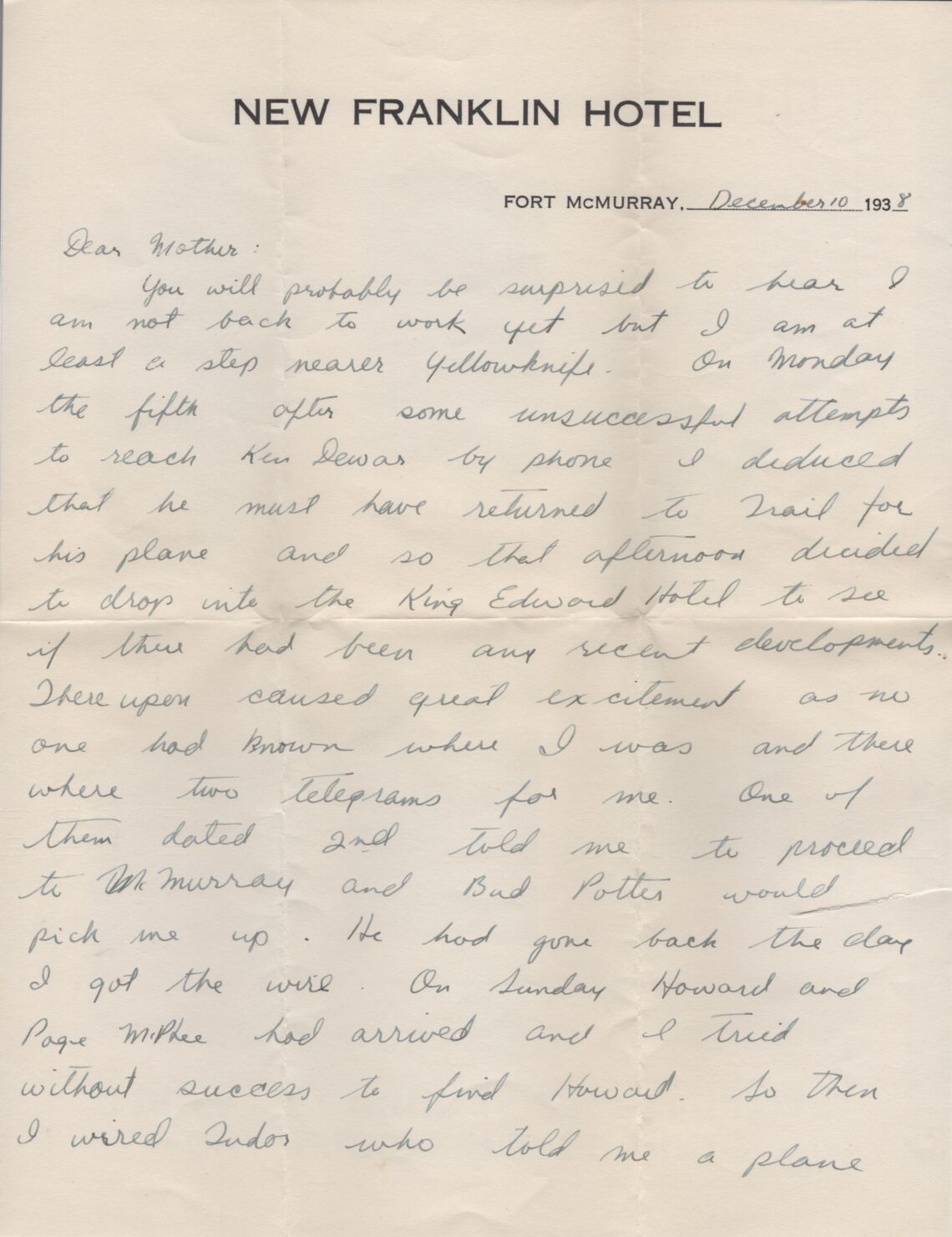 You will probably be surprised to hear I am not back to work yet but I am at least a step nearer Yellowknife.  On Monday the fifth after some unsuccessful attempts to reach Ken Dewar by phone I deduced that he must have returned to Trail for his plane and so that afternoon decided to drop into the King Edward Hotel to see if there had been any recent developments.  Thereupon caused great excitement as no one had known where I was and there were two telegrams for me.  One of them dated 2nd told me to proceed to McMurray and Bud Potter would pick me up.  He had gone back the day I got the wire.  On Sunday Howard ND Page McPhee had arrived and I tried without success to find Howard.  So then I wired Tudor who told me a plane would pick me up in McMurray on Friday “weather permitting”.  I left on Wednesday morning and have been here ever since as the weather has not permitted much flying.  I came up in MacKenzies Airways new Bellanca and it only took us two hours.  Ben Harrop came in this morning.  He started out from Goldfields yesterday before breakfast and was forced down by bad weather halfway so he had a hungry load of passengers with him.  Radio was so bad yesterday that our agent could not get through to Goldfields.  Ben is going through to Edmonton and so if I could foretell weather I could have stayed there all this time—having a more enjoyable time, getting a free passage to here—and still picked up my own plane to Yellowknife.  On arrival here I found three other company employees here which has helped matters a lot.  I played innumerable games of snooker with one of them but we had to curtail this as we each have only one dollar left without considering our hotel bills.  I hope they accept my cheque.  I have had breakfast here once, then realized it was more sensible to sleep till after eleven like everyone else.  We have seen the weekly show and had an evening of bridge last night so are wondering what we can do tonight.

I have bought a windbreaker from one of the boys as he forgot to try it on when he bought it.  It is lined with eiderdown and fits me so well it looks as if it was tailored.  Eric sent me a parcel from the Con—my parka, some heavy socks, a few paper bags (I will give these to one of the other air passengers) and an envelope marked “Beer Money”.  There was 25¢ inside but under the circumstances much appreciated.

I hope I won’t be in the dog-house when I get back to Yellowknife.  I have been away fifty seven days now.