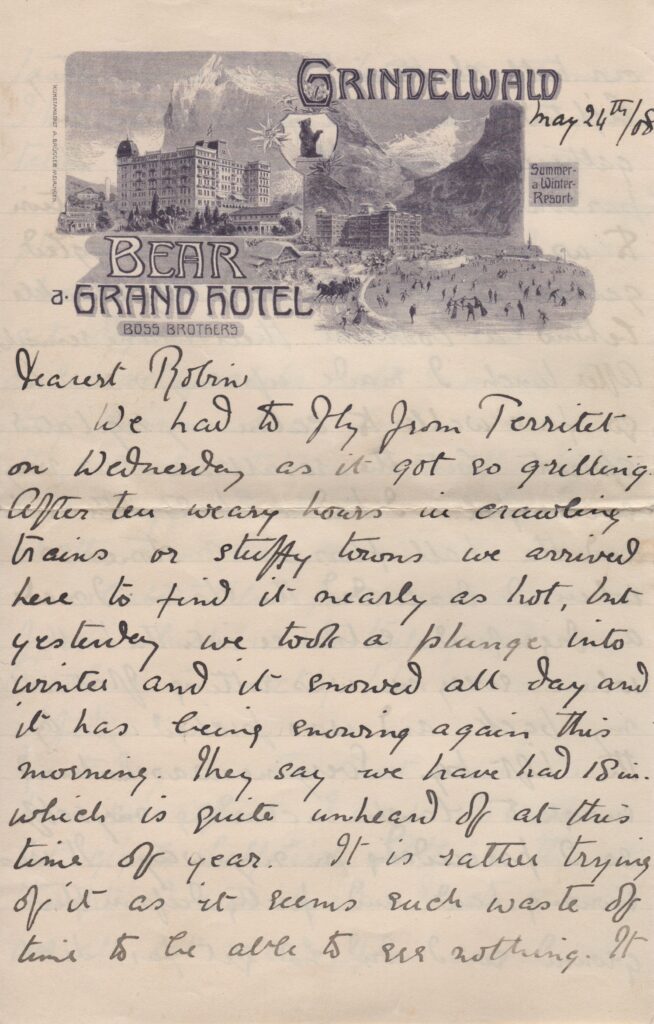 We had to fly from Territet on Wednesday as it got so grilling.  After ten weary hours in crawling trains or stuffy towns we arrived here to find it nearly as hot, but yesterday we took a plunge into winter and it snowed all day and it has been snowing again this morning.  They say we have had eighteen inches, which is quite unheard of at this time of year.  It is rather trying of it, as it seems such waste of time to be able to see nothing.  It is so thick that all the mountains have vanished although they are so close it generally looks as though one could touch them.

The hotel had only been open a few days when we came and they are still busy painting and doing up part of it.  There are only two lots of people here besides us, two parson brothers Willie and Harry, their sister Caroline, and niece Gertrude.  I believe their other name is Francis but we have not been introduced.  They came by the same train as we did.  The others are two miserable looking women who arrived yesterday with blue noses and icicles hanging round them.  They look as though they were going to cry all the time and never speak above a whisper.  Altogether they are a rum lot and make me laugh every time I look at them.  I have to sit with my back to the parsons’ table at meals because the sight interferes with my progress.  I changed places with Norah once and I nearly choked all the time.  The parsons sit opposite one another and they are exactly alike, with enormously long noses which look as though they must catch in each other if they both happened to lean a little forward at the same minute.  Gertrude too wears a cobalt blue frock with a scarlet face, which is disturbing, and Aunt Caroline is exactly like our coachman’s wife!

Yesterday was the most absurd day I have ever spent.  I could do nothing but giggle helplessly.  I think they all thought I was mad.  To start with we all sat rolled up in coats with our teeth chattering till at last they lighted a huge fire for us, then we gathered round the hearth and the parsons tried to make conversation to us.  Auntie and Norah struggled gallantly but I could only chuckle behind a book at their inane remarks.  After lunch I made up my mind to go for a walk to calm my agitated spirits but the result was not very successful.  I had on boots with nails and the hall floor is of stone so when I descended the stairs I made a dignified entrance into the hall where everyone was sitting flat on my back and was picked up by the lift boy.  Everyone was unkind enough to laugh including myself so I proceeded on my way.  It was snowing hard and pretty deep on the ground so I did not get far.  Just as I had started back feeling quite calm I met Willie who stopped to enquire if I was much hurt and said he had once measured his own length on that same floor and found it hard.  Of course that upset me again and to finish matters I tried to shake the snow off my umbrella and the stick broke and the umbrella part went whizzing down the street like a catherine wheel.  I broke one the day before so if I go out today I shall be reduced to a lace parasol.

I tobogganed on the other one, owing to having no nails this time!  We had only meant to go for a short walk so I put on shoes without any but the temptation to go upwards was too much for Norah and me and we started to climb to a spot called “Aelfluh”.  What that means we never discovered but we got a grand view from it.  Then we started down another way and took a short cut down a grass slope to the path.  It was a very short cut for me as I slipped, sat down, and tobogganed to the bottom at an excruciating rate.  Norah’s face was a study.  She had got down safely and turned round just in time to see me start.  Her mouth was wide open and I thought her eyes would drop out.  Then she gave a wild yell of laughter as I came gracefully to anchor at her feet seated on my umbrella, which gave up the struggle of acting as a brake with a loud crash.  It would have been quite a nice sensation if I could have felt the least sure of stopping anywhere.  Fortunately there was a little hollow and a bank up which stopped me, but if I had started a few feet to either side I should probably have been still going now, as I should have missed the bank and shot over the path down a rocky bank below and there would, I am afraid, have been an end of your broad-shouldered maid!  However she is having nails put in the offending shoes and will be more careful in future.

Our first day we struggled up to a glacier.  We wanted to go across it but they said we should have to be roped together so we only looked at it instead and watched some avalanches thundering down.  We have heard a lot while it has been snowing but it has been too thick to see them.  It is a perfectly glorious place and I am just loving it in spite of the snow, but I think Auntie is rather keen to move down to Interlaken where there would be more people and concerts or something if it were wet, but Norah and I both want to stop here so I expect we shall.  It is fine now too so I expect the snow will soon go.

Last night the electric light would not work which was rather trying.  It went out first just before dinner but it wasn’t really dark then so it didn’t matter.  The next time we were suddenly left in complete darkness, the parson lot playing cards and the rest of us reading.  We daren’t move for fear of falling over each other.  The porters had to bring steps to light the lamps, which they seemed to find rather difficult as they had no means of seeing whereabouts the lamps were.

I believe we are going to Mürren when we leave here.  It is close to the Jungfrau and, Norah says, a delightful place.  She was there a long time ago.

We are hoping to go up the Jungfrau if the railway is open yet.

There is really nothing interesting to tell you.  The parsons are our only topic of conversation.  I do wish you could see them, I know you would enjoy them.  I wonder what you are doing now, if you have gone back to winter too?

This seems an extra weatherly letter.