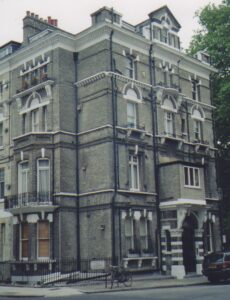 I was very glad to get your letter yesterday and to know that your mind is still made up in the same direction.  [The letter of Robin’s to which Kathleen refers is not extant.  It must have been written about June10, 1908.]  It saves me so much trouble, you see, as of course mine goes with it!  Honestly though, I do want to go out to your country, not only because you want me there but I want to go myself.  I think your being so certain I shall like it has made me quite absolutely sure too and if other people think we are eccentric what on earth does it matter?  The opinions of my friends have never bothered me much so far and after all I suppose we shall return to the homeland now and again and shall probably see pretty well as much of our relations as if we lived a hundred miles or so away in England.  [As far as I know, Robin and Kathleen never returned to England after settling in Kelowna.]

I am sure I told you heaps of times before you went away how much I want to go out with you but you shall have it in black and white if you like.  Oh Robin, you know how I want to come dear, so much that, well, even I can’t quite think how much sometimes.  I just long to see all the things you have told me about and the house and all your friends and everything, and I love getting your letters about all the alterations you are making.  It’s absolutely impossible for me not to come now, isn’t it, when you are doing so much to the place.  All that energy and labor mustn’t be wasted.  I shall have to come out anyhow to see if I am going to like that sort of life and if I don’t, well, you’ll just have to bring me back again; and I will apologize profusely to my relations who will all say “I told you so!”  I suppose Uncle Jim is the only person who will now have to give his consent.  They have to make a new trustee in Trevy Martin’s place but I imagine he won’t have any kind of power as a guardian.  Marjorie thinks if I fell on Uncle Jim’s neck and appealed to his “better feelings” (I think she expressed it) he would not be able to resist my eloquence, but I am afraid I am not good at that sort of job and I am not sure that he would take it well either; however I think he will say anything to save a fuss, so I expect it will be all right.

We came up here last night and have been nearly grilled.  Oh, London is a hateful hole even when you are enjoying yourself as hard as you can (in the intervals allowed by the dentist).

We went to an awfully good play this afternoon, “Lady Frederic”.  Eva Wiggin and Violet Goodeve went with us and tomorrow we are all going to the Franco-British Exhibition together.  We are going to spend another afternoon and evening there on Saturday with Reggie, Uncle Jim and Hereward.

The Barnsleys came up by our train to go to the horse show.  He was in one of his maddest moods and insisted on racing me along beside the railway line, each picking out our places in the fences and seeing who would come down first.  It was a most exciting game but so upset a sweet young thing who got into our carriage at Oxford that she bolted out at Reading.

I went over to Daylesford on Sunday to spend a quiet afternoon with Marjorie and Hilda Robinson who is staying there, but I did not manage to see much of either of them.  There was such a crowd there.  Besides the family, an Oxford friend of Freddie’s was staying there; and Mr. Arthur Young, Mr. Follet, and a friend of his arrived to lunch; and “Dossie”, Bunnie Wingfield, and the Cingalee Hodson turned up during the course of the afternoon, and we grilled in the sun and tried to make polite conversation to each other.  As a nice finish to the day Mr. Follet offered to motor me home in the evening and I had much ado to get out of it with credit!  Fortunately I was able to say Auntie was coming across the fields to meet me and I might miss her.  Imagine her shocked expression if I had accepted his charming invitation!

June 25th   I have been touring in Canada this afternoon on what called itself the Scenic Railway at the Franco-British exhibition.  I hope your railways don’t behave as this one did.  It was a switch-back thing and we bumped up and down in a most violent way and whizzed round corners and through tunnels and up mountains and met polar bears and skeletons and all sorts of weird things.  We also went in a Canadian toboggan, which was really a thing like a motor-car which switchbacked along.  I had to go in it twice, I loved it so!  I wanted to go to the Canadian Exhibition Hall but that didn’t seem to interest the others.  I hope one of them will take me there when we go on Saturday.  Violet Goodeve took an awful lot of persuading to make her go in anything.  She is a dull girl.  I got quite tired of trying to think of something to say to her.

We are going to the horse-show tomorrow night.  I hear some of the foreign horses are wonderful jumpers.

I am so glad you have got such nice men working for you.  It must make such a difference if you have people you like.  I suppose you are furiously busy hay-making now so I shan’t expect another letter just yet.  All the same, I hope I’ll get one.  I miss it horridly when it doesn’t come, you know.

I met the charming vision of Agnes Witts this morning.  She said she was going to the Exhibition this afternoon too with the Fentons and hoped we should meet.  I hoped to goodness we shouldn’t!  I don’t know her dear Fentons but I’ve seen them.  Fortunately the Exhibition covers many acres so there was room for us all.

Peggy Fenwick’s engagement does seem to have been a Grisewood invention but they say Mrs. Godman started the report.  I saw Francie Witts the other day.  She seems awfully disgusted at having to go to Guiting.  She says she will have to take up fishing and shooting as there will be nothing else to do.  Mrs. Witts is not going to let them hunt with the North Cotswold, which is a cheerful out-look for them, isn’t it!

Geoff has practically disappeared off the face of the earth as far as we are concerned.  We occasionally get a post-card telling us where to send his letters and that is all.  I believe he goes into camp on Monday for three months but I haven’t the ghost of a notion where.

I shall become a drivelling lunatic if I prolong this epistle in this heat so I will take it out and post it instead.