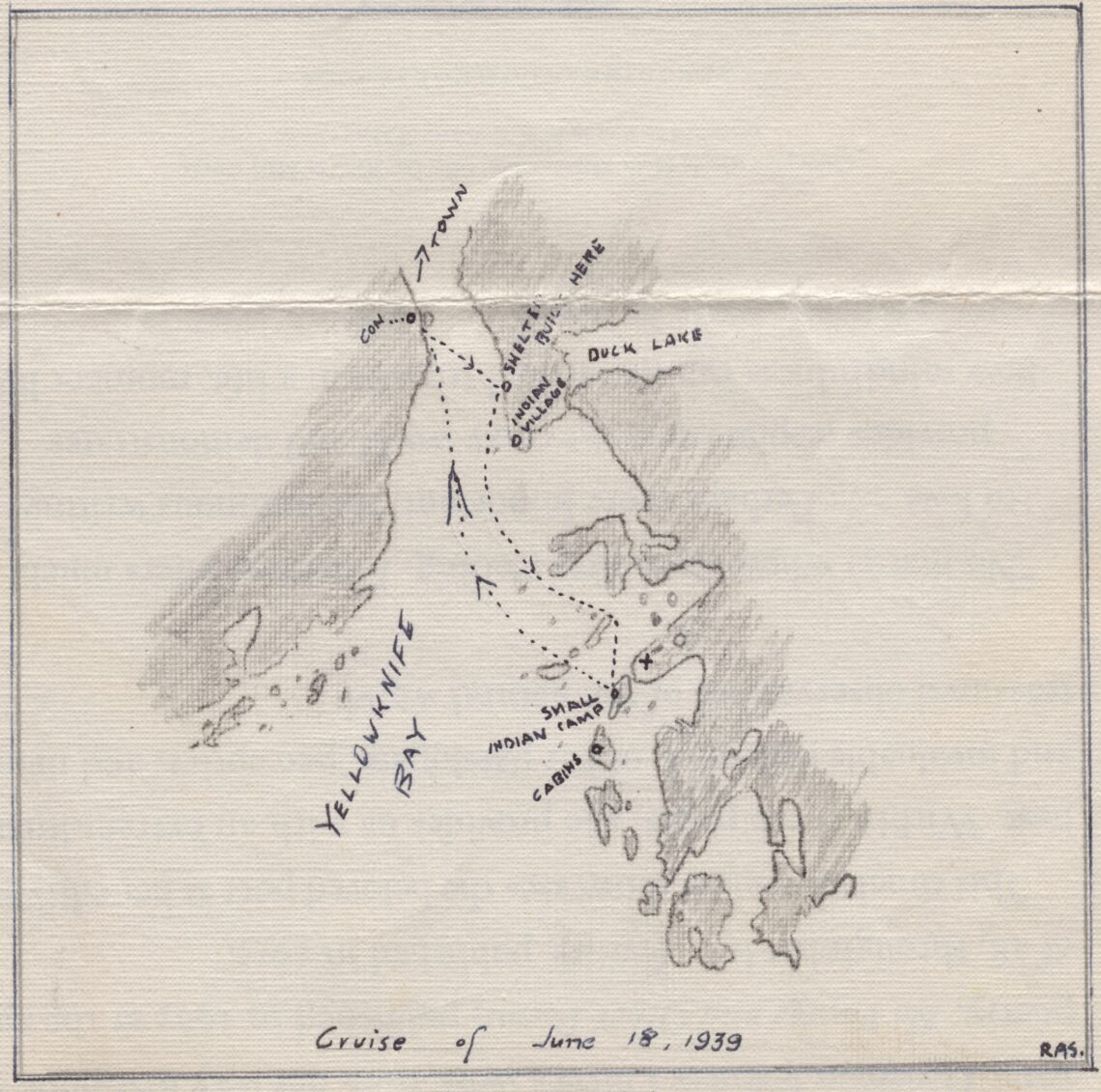 Last Sunday and today we had very good sailing—going south fro here each time along the east shore.  Last Sunday we were almost opposite the Indian Village when we passed the Hearne Lake the first McKenzie [sic]  River Transport boat of the season.  It was quite a sight to pass the first boat of the season far out in the lake as we were at the time.  Since then in the middle of the week the Dease Lake, the Hearnes’s sister ship arrived with three more barges and again today as we were homeward bound we were passed by the Hearne Lake coming into Yellowknife on its second trip.

With so much freight coming in there is a great deal of checking to be done and one of the office staff is helping with this and I find I have his work to do as well as my own.  Consequently my pile of invoices instead of diminishing is growing.  I am supposed to check all the stores requisitions too but the good part about this new job is that there is no deadline to beat twice a month.  Indeed most of last week has been spent helping Eric close the books for the month of May so that he would be able to get off on Sunday.  Eric was delayed on the May closing by the auditors who had the books most of the time.

The auditors visit is always a rather arduous time.  For instance one of my jobs before was the computing on the basis of direct labour of the proportion of camp expense to be borne by the mine, mill & Rycon Miners Ltd. Respectively.  This involves several thousand dollars each month so I had done it fairly carefully but the basis on which it was done is so vague that it is almost impossible to check back.  To satisfy themselves the auditors made me recheck a month and naturally it wasn’t the same.  Then I had to try a different month with the same result.  However it all balance out in the end as they found that during the year Eric had somehow changed a percentage from ½ of 1% to 1% when bringing forward this invariable %age from one month to the next which counteracted mine.  However the system has been changed so that the direct labour can be checked by the auditors.

The most exciting incident of the trip last Sunday was just about at the furthest south point of the trip—about seven miles from Con.  We were sailing amongst the islands about 100 yds from shore under a strong wind when with only a seconds warning we hit a reef.  Eric was just getting up to pull up the centre-board and he was knocked flat.  The first reaction was the boat tipping forward so that the bow when [sic] under and then the wind took its effect so that we when [sic] sideways and I just remembered to let the sail go in time.  Our third passenger had been standing on the tip of the bow and nearly tore his hand off holding onto the guy wire.  It really was a hard knock and I was sure the centre board well would be badly damaged but there was no visible signs of any harm at all.

Practically every week day is beautifully sunny but for the last six weeks I think there has been at least some rain on Sunday and today was the culmination of them all.  We took two passengers today, the Hamiltons and started off about ten.  Before we were halfway to the Indian village the rain started and it really poured so that we were soaked.  We landed this side of the village and lit a fir and dried ourselves out as the rain had stopped by then.  The weather still looked black and I think everybody wanted to turn back and would if it hadn’t been for me.  I didn’t want to give up after working all week for this day and so we built a very good shelter beside the fire with moss and fir boughs etc.  Then we had lunch and by 1:30 there was a patch of blue in the sky so we set sail again.  Our proposed destination was an island which according to the map has cabins on it and eventually we spotted some tents and landed close by.  However it proved to be an Indian village and we learned form them that we should have landed on the next island further down but it was then too late to go on.  There are so many islands it is hard to identify them from the map.

I bought a very good compass in town so that we wont ever get turned around as we did up the river and I carry a small map also.  The next rip is to be on the opposite shore and may possible [sic] be an overnight trip.

On both of these last two trips the wind has been perfect for sailing being strong and broadside to the boat in each direction on the open streches [sic].  I measured our course for today on the map and measured in straight lines it came to just over thirteen miles.

We are supposed to have a liquor store here shortly and indeed both the liquor and the store are ready and only waiting for official permission from Ottawa.

There is a new taxi that is far ahead of the usual skiffs with outboard motors.  This one is a launch something along the same lines as the Anwolek but not quite so long.  It is supposed to do 28 m.p.h. on still water.  I am wondering whether I will be able to do a little surf-riding later on in the summer.

The fires are very bad this year and spring up in no time after the usual Sunday rain.  One of them was getting quite close to the Ptarmigan mine.

Gray’s radio came in on the last plane.  It is a Philco mantel model and seens to work fairly well although we are a little puzzled by the intricacies of the t;uning knob.